After watching Government broadcasts daily for months Grandads have largely been prepared to follow the experts’ advice – no matter how much it lacked in logical consistency. 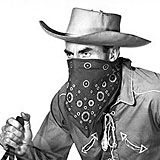 But the latest round of political micro-management is pushing even the most responsible seniors to the edge of their credibility. And the chief issue today is face coverings.

When the risks were greatest and the case numbers were peaking back in April the sage advice was that face coverings were not required outdoors, in supermarkets or in the few shops that were still open. In fact they were being described as counter-productive because wearers might act as if they were better protected than any non-surgical mask can provide.

But then last week Scotland decreed that they were going to be required in shops from 10-July while the UK-wide government in London did not. Now we are told that the disparity between Scotland and England will end on 24-July when the same rule will apply. But why? If face coverings are required now in Gretna Green why not a few miles south in Carlisle? If they are compulsory in 10 days time in England what is so different over the next 9 days? Why wait until 24-July for them become so important that you will be liable for a fine for not obeying.

Now face coverings are just one of the differences in rules that were and will be applied seemingly at random by various levels of government – often claiming to be based on medical advice. Advice which is itself inconsistent and lacking in hard evidence. The only slight bright spot is that the police have no chance of enforcing the law .. like so many things that politicians pass laws about!