Despite all politicians trying to keep attractive public issues to the fore – like real incomes, resources for schools, health services, policing, etc. – the topic of leaving the EU just will not go away. And since this is – in theory – the last season of party conferences before we leave, the topic has become unavoidable.

Sadly debate seems to have sunk to pro and anti factions calling each other names, a government tied to an unworkable plan and an opposition promising to block anything the government does. None of which is going to benefit the man on the Clapham omnibus.

But behind this lays a widespread impression that certain senior UK figures have tried – over many years – to lead the country down a path that has been deliberately concealed. And concealed because it would be unacceptable to the majority in a democratic vote. A view that has been subsequently supported as official documents were released at the end of their thirty year embargo. Even some European politicians openly confirmed the strategy.

That was why there was such opposition to having the 2016 referendum. It presented a rare opportunity for the ignored majority to change the national direction. Certainly plenty of those steering us towards a United States of Europe – lead by Germany and supported by France – were dismayed at the prospect. Even though almost all thought that Britain was too far committed to leave. Now they are working hard to either block the UK leaving or if that fails – speed-up the unification of the other 27 states and then ensure that they all boycott Britain.

So the next six months will see Britain faced with three outcomes – give up and ask to stay in the EU, leave in name only or regain true independence but be black-balled by our former partners. Will the British public choose financial self-interest over political independence? Who can say? But anyone that claims to be interested should just take a little time to read one or two of the many publications on the subject … You might be surprised.

Google a title to find your supplier

Well that certainly went well for Olly and Theresa’s masterpiece – the Cheques Plan. 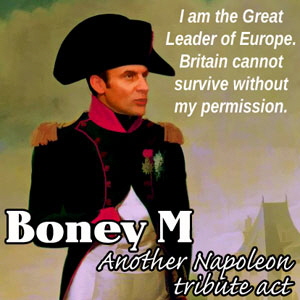 The EU side was unimpressed with the British plan – which is hardly surprising considering that it was unchanged from the one released in July. Then, as Grandad reported, The Irish Times had led with – Brexit: UK’s White Paper largely unworkable, says Barnier.

Unsurprisingly it is still largely unworkable from the EU standpoint. What did our PM and her advisors expect them to say? Oh yes, we were wrong all along – please go ahead with your plan. True, they could have said something mildly encouraging and non-committal – at least in public. But there has already been more than two years of Britain trying to get the deals that the EU will never give. A permanent impasse blocking Whitehall’s impractical dreams.

So that’s another two months gone without any useful progress but plenty of inept political posturing. Going forward we really should not spend any more time on these futile exchanges. It’s time to drop the dead donkey and accept our role as an independent nation once again. Grandad just wishes that we had another Duke of Wellington figure to take the lead.

For much of the British public professional cycle racing is a foreign sport. And this is largely true when you consider how many races are held in mainland Europe each year and how few in Britain. So it really is remarkable that all the races that make up the European Grand Tour trilogy have been won this year not just by a British athlete but by three different British athletes.

To put these results into some sort of  perspective the situation in 2011 was that no British cyclist had ever won a Grand Tour. And Grandad was starting to think that it would never happen. Then everything changed as Team Sky got the funding and talent together for a serious attack despite the challenges faced. Now six of the last seven Tours de France have been won by British riders backed by Team Sky. And this year saw Team Sky win the Tour of Italy for the first time and so set-up the chance to take this unique triple victory in 2018.

As Britain faces its biggest political challenge for decades – exiting the European Union – there is still no clear consensus on how the nation should best proceed. 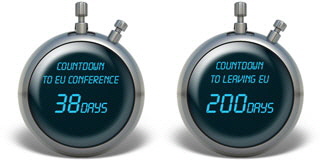 Despite 800+ days of argument the opposing sides seem even more split now than they have ever been. In theory the EU want to see a final plan at their conference in just 38 days time – but that seems unlikely. Parliament has only being back in session for a week and MPs main pre-occupation seems to be their party conferences later this month.

However various political factions are hoping to raise enough numbers to force another referendum. This time on the final leaving plans. But even if they somehow get the numbers the big stumbling block will be the nature of the question to be voted upon.

Since we have already voted to leave and given official notice to quit it would need both a UK about-face and the EU to agree to have us back. A situation where the UK would be unable to protest if the EU demanded that we loose the various concessions and rebates that we have enjoyed so far. And since some key EU members have been trying to remove Britain’s advantages for years that must be a likely scenario.

Having a referendum that does actually provide a no deal option seems to be the fairest option. But it would, of course, be opposed by those who want to stay in the EU at any price. It would, after all, give the plebs a second chance to stop the elite taking us all down their pathway to a German dominated super-state.

And if there was another referendum that resulted in a reversal of 2016 result then it would be quite likely that we would have an immediate demand to make it the best-of-three.

But all of this will be academic if, somehow, Olly and Theresa’s crumbly fudge of a deal is accepted by the EU – and also gains a majority in parliament. Then the UK could voluntarily become a satellite colony tied to EU rules but lacking any form of representation. A sad situation that would then act as an example to all the remaining EU members states of what would befall them if they dared to vote to leave.