On Friday the man behind electric vehicle maker Tesla, Elon Musk, launched the long-awaited Model 3 – the zero-carbon economy car for the masses.

And it looks good from the publicity shots even if the stark dashboard – just a single screen – may not appeal to all the target buyers. With a starting price of $35,000 it should sell well in states like California especially since Tesla claim to have over 500,000 advance orders already.

Meanwhile in the UK the Government announced that they intend to stop the sales of diesel and petrol motor cars by 2040. So giving the UK’s motorists 23 years to change the habits of several lifetimes. This story made the headlines in the news bulletins yet few in the media (or the Government) seem to thought through what such a change would mean in reality.

When the issue was raised of where all the electricity would come from to power the vehicles the studio expert said it was not such a big problem as most people would want to recharge their cars overnight when other demand was low. Then the issue of where to plug-in was raised and the suggestion was that lamp posts could be equipped as charging points.

Now both of these answers are totally impractical yet they are just a couple of superficial issues. The bigger issues include – what tax will replace the millions-per-day in duty and VAT on petrol and diesel that funds so much Government spending? Who will fund the upgrading of the power distribution network that runs to every street sub-station and home? With at least forty cars just in Grandad’s short street the overnight charging load would be too great for the existing cabling to handle. Digging up roads and erecting more pylons seems unavoidable. 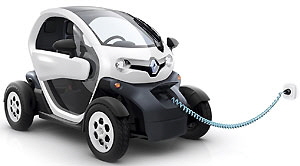 Of course the Government will attempt to use legislation to make the ill-considered plan work – with their usual limited effectiveness. They may, for example, limit the size of the electric vehicle we can own according to perceived need – with singles being limited a micro-car and four-seaters being reserved for families of four, etc. Anyone with unused seats in their vehicle will be surcharged.

Even our public services will not be exempt with police, fire and ambulance vehicles included in the fossil-fuel ban. 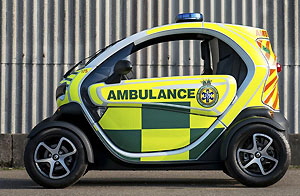 And some enterprising car makers are already on the case … as you can see in this shot of a Renault ambulance [This is a real vehicle – not a Photoshop creation!]

The only bright spot for anyone who believes that switching to a more economical petrol car now would be just as effective, cheaper and quicker to implement is knowledge of politicians’ previous track records. Take, for example the Government plan to make all new homes zero-carbon by 2016. It turned out to be totally ineffective .. like the various carbon-trading schemes and misguided incentives in Northern Ireland.

Another fifty days have ticked over on our Leaving The EU Scoreboard with progress being even less visible than in the slowest of slow test matches.

Now back in January Grandad used the best impartial estimates of Britain’s EU contributions and refunds to calculate that the tax payers are giving a net £121 million per week to Brussels.

Since then the EU have upped the UK’s bill. But even without that increase the total we have contributed has reached a staggering £6,914 million net since our independence vote last year. And its little wonder that some fat cats are upset at the thought of being forced to diet if we really do leave.

But is there any doubt that we will get back our independence one day? Well it seems there is .. with some lobbyists wanting the leaving process halted or reversed. And others wanting a very weak exit that is little different to, or less expensive than, staying as an EU member. This is euphemistically called a Soft Brexit – to make it seem more attractive to the British public. While taking a strong approach towards protecting the UK’s position is labeled a Hard Brexit to make it make it appear difficult and dangerous. A use of language that could have come straight from George Orwell’s Ministry of Truth. But in reality a soft (= weak) outcome would mark the end of any true British independence and make us all second class citizens on the edge of an emboldened European pseudo-state.

But still some limited progress has been made. Meetings have been held between both sides in Brussels – even though the top men on the British side seem to have restricted their efforts to smiling for the cameras and then heading home. Also a Westminster bill to transfer-in all the missing EU laws – and restore the supremacy of UK courts – has been presented but not debated. And nothing much will now happen to until everyone’s summer holidays – and study tours to exotic destinations – are out of the way.

With MPs not due back to Westminster until 5-Sep-2017 – but then hoping to leave for the conference season on 14-Sep-2017 – there are just eight working days in the Commons before October. Not much time to review the efforts of their public service sherpas – or make sensible, informed decisions about anything. However the situation in Brussels (and Paris / Berlin) may be no better – but then we don’t get to hear about that back in the UK.

Status update – hoping for the best. 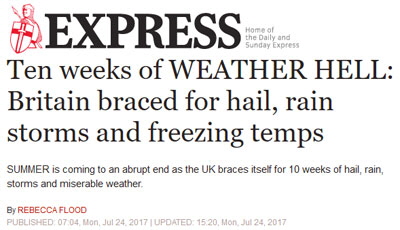 Despite years of contrary experience Grandad reluctantly agreed that the Express was right when warning of a Conservative melt-down. And so their journalistic credibility had been restored in our eyes.

In which case we simply had to believe their forecast of a 100 days of blazing heatwave – and planned for sweltering Summer.

But at less than halfway through those 100 days we find Rebecca Flood (did you spot that kiddies?) is forecasting 70 days of hail, rain and freezing temperatures instead.

With no way that both stories can be correct it’s back to bottom of the pile for the Express journalists. And perhaps Grandad’s biased prejudices were nearer to the truth after all.

Anyone involved in commercial computer systems will be familiar with the use of batteries to protect against power cuts. But today sees an agreement to provide stand-by battery power on a much bigger scale.

The city of Adelaide and indeed the whole state of South Australia is confirmed as going ahead with a scheme to install an array of lithium ion batteries linked to wind turbines. 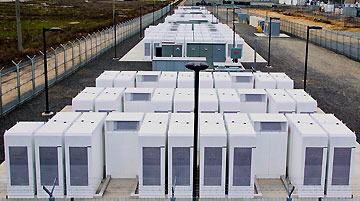 This 100MW Tesla system is the world’s largest battery backup installation to date and should provide the state with some much needed reliability of supply. The hope is that the system will add some stability to the state’s famously temperamental electricity supplies before the expected peak demands around Christmas and New Year.

South Australia has plenty of sunshine and millions of hectares of land with little commercial or residential value so wind and solar farms face few obstacles. Which are much needed given that the state’s coal-fuelled power station stopped generation last year and is now being demolished.

So what does that tell us in the UK? Well even a 100MW system would not cover much of the UK’s daily demand and its $A33 million cost would not have any obvious savings elsewhere. However our lack of new power sources plus an increasing population means that the UK is likely to face power cuts eventually – even allowing for the promised savings of smart meters. Consumers in Adelaide already know that smart meters do little to reduce demand but do add to the total cost of the service. But here planners seem to have a strategy based upon hopes rather than reliable forecasts. And if the French Government changes its mind about funding British nuclear power stations then it may well be lights out for all of us.