Later today the Queen is set to formally kick off the next session of parliament which is, this time, scheduled to run until 2019. The speech today will set out a much changed agenda from the Conservative manifesto of just weeks ago. A manifesto that must go down as one of the most misguided and least appealing on record. Considering the amount of work required to clear up Brexit and the inherited EU legislation – who thought it was a good idea to reopen old wounds with such a non-critical issue as fox hunting?  And who decided they would win more public support by threating pension cuts or disruptions to social care? 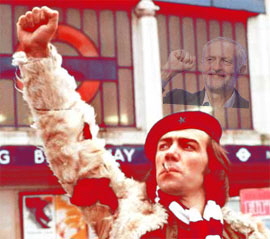 Meanwhile down the road various agitators and opportunists are trying to overthrow democracy with calls for Class War and a Day of Rage march to parliament. As if the Met Police don’t have enough issues to tackle in London already.

Sadly Her Majesty’s official opposition have not condemned the march, its motives or its supporters – simply hoping take cover until the trouble has passed. Then to emerge from their bunkers and claim the political crown. Certainly some shadow Labour ministers are encouraging unions to maximise disruptions until they have forced themselves into power – especially if they fail to vote down key parts of the Queen’s Speech in the coming days.

So not much point in voting if the losers try to grab power through threats and violence. Perhaps the UK is now heading towards the dope-fueled anarchy that some citizens want … And that’s some legacy for Grandads to contemplate.

After the shock success of the DE election prediction Grandad has had no option but to reassess his views. So now we are totally confident that suntan lotion, cold beers and loaded barbecues will be all that we will need for the next three months or more. 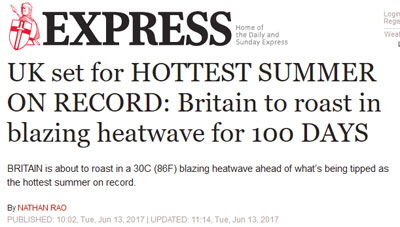 Meanwhile the politicians, civil servants and assorted activists can roast in the flames of the hell that they have created. Another fine mess where the UK political establishment is floundering around in La La Land while being attacked from both within and without. A farce where no one makes any useful progress and the only certainties are more taxation and broken promises.

What next? The EU asked to appoint a competent negotiator to act on our behalf – with Guy Verhofstadt as acting Prime Minister? Excalibur is found in a lake and used by Cornwall to declare independence? Greece finds a hidden stockpile of bullion and pays off all its debts? Tony Blair descends on a golden cloud and saves us all? Who knows …

“But Grandad could be wrong, the DE spin could be proved right – and UK voters could cause another political surprise.” Grandad was wrong – the DE spin was right!

“But just imagine what could happen if we wake up tomorrow to the prospect of a hung parliament or a change in government … Gawd help us!” We really do need help … big time.

Back at our Leaving The EU Scoreboard not much has changed. In terms of regaining our independence from the EU that is. Another fifty days have gone by with the UK’s political parties spending their time – and our money – canvassing for our votes on their big issues; or at least their small issues made to look big.

By late tonight the first of the general election results will be declared and who finally gets the short straw to handle the EU negotiations will be confirmed.

However all parties seem to be working on the notion that we have until March 2019 – or even later – to sort out a deal. Yet the EU’s chief Brexit negotiator, Michel Barnier, was reported as long ago as last December as requiring a deal by October 2018 – to allow time for all sides to ratify it.

Considering that almost a full year has been wasted on diversions and squabbles, things do not look promising for a well thought out solution by then. And even though some actual negotiations are due to start this month there are already new excuses being found for more delays. For example the state opening of parliament has now been called for 19th June – the same day as the promised start of EU negotiations – and the German federal elections fall on 27th August so blocking any meaningful EU progress [Correction; 27-Aug was the earliest allowed date. The actual date is now set as 24-Sep]. But with the UK parliament due to have their summer break from July to September that’s just one more diversion. Meanwhile millions per day in EU payments are still being given away; with little regard for our ever increasing national debt.

But just imagine what could happen if we wake up tomorrow to the prospect of a hung parliament or a change in government … Gawd help us!

The Daily Express has built-up a well deserved reputation, over the years, for silly weather prediction headlines – and a good line in wacko science fiction reports – but its political stories are just as far fetched.

But Grandad could be wrong, the DE spin could be proved right – and UK voters could cause another political surprise.

We will see by the end of next week.