On Saturday European politicians were congratulating themselves over the Treaty of Rome of 60 years ago. 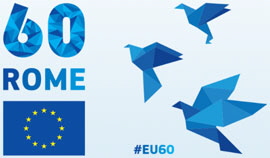 So quite a memorable few days. But also a reflection of some very unstable times and with the threat of more to come. Since neither the EU nor the UK are guaranteed to exist in their current form by 2020 – even allowing for the UK leaving the Brussels club.

With a majority of voters in Scotland and Northern Ireland favouring a future within the EU, both countries are even more divided over their future status. In the EU or out? In the UK or out?

England and Wales have a sizeable minority who want to follow the route set by Brussels – and have friends in high places able to make independence difficult. Meanwhile the EU is itself faced with a crisis of confidence with the loss of a major contributer and various national politicians who want to take power back to themselves.

We, clearly, are in times when the destiny of the nation – and every one of its citizens – hangs in the balance.

The debate we are engaged in as a nation is about the future of
all of us lucky enough to live in this diverse and vibrant country.
It is a rare and precious moment in the history of Scotland – a
once in a generation opportunity to chart a better way.

And this definitive document then went on to state –

The Edinburgh Agreement states that a referendum must be
held by the end of 2014. There is no arrangement in place for
another referendum on independence.
It is the view of the current Scottish Government that a
referendum is a once-in-a-generation opportunity. This means
that only a majority vote for Yes in 2014 would give certainty
that Scotland will be independent.

If we vote No, Scotland stands still. A once in a generation
opportunity to follow a different path, and choose a new
and better direction for our nation, is lost. Decisions about
Scotland would remain in the hands of others.

Strange how the same politicians puff and blow that it’s now time for a second vote. Yet we are just three years on from the last one…

Time for the people to make their political representatives honour their threats/ promises by blocking another vote until at least twenty five years have past.

Politicians sometimes wonder why there is increasing public cynicism about their motivations and performance. And with the Brexit process they have had the chance to show everyone that the public’s concerns are misguided.

Yet as we slip past the 250 days mark without completing any of the steps needed to leave the EU they seem to be determined to prove, beyond doubt, just how ineffective they have become.

And sending Brussels our resignation is just the easy part. Once accepted by the Eurocrats there follows a maximum negotiating period of 730 days. A limited time to either complete the difficult negotiations – or give up and leave without agreement. Based our politician’s performance so far, leaving straight away would achieve the same result with a lot less hassle. But then the Lords and Commons don’t get paid by results so it looks like Grandad will be stuck with writing these depressing posts for years to come …