Even though opinion polls have had some notable fails in recent years no one has come up with a better way of gauging public views on a wide range of topics. Despite recent history combining the results of several separate polls can provide a fair chance that any actual results will turn out close to the predictions. 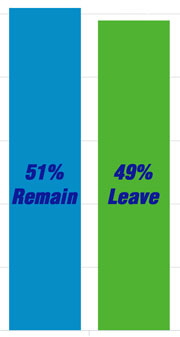 So for the forthcoming UK referendum on EU membership this is the Poll of Polls result from whatukthinks.org as at 29-Mar-2016. Despite all the scare stories about our terrible fate and economic collapse if we leave the results are surprisingly close.

The Conservative Party are leading the way not only with dire warnings and grand promises but also by black-marking any members daring to support leaving or even question the accuracy of the predictions. The Labour Party has its own dissenters to its Remain policy but they seem to be blocked from speaking out. The LibDems have become an irrelevance but the few survivors are in the Remain camp. Meanwhile the SNP have EU membership as an article of faith so it is obvious how they will canvas and vote. UKIP is, of course, struggling on trying to rebuff all the attacks and make the Leave case – as are a few determined others. But it does feel like they are a surrounded and are running out of ammunition.

So there is little chance that the political establishment at Westminster will provide much support for the Leave campaign. Rather the vast majority of MPs will be trying to sink it without trace. The same goes for Brussels – along with the political leaders of every EU member state. Not surprising since they all need the UK to help pay the bills and provide their citizens with jobs.

When you add in the pressure to remain from countries like the USA and China the odds of the UK  leaving the EU ought to be 100s to 1. But clearly the average voter remains unconvinced .. and now there are less than three months to go.

Olympic Build Up – Yesterday the Rio Olympics organisers announced that the delayed track cycling test event had now been canceled entirely due to more delays and problems at the velodrome. However Brazil does not have an alternative venue to fall back on – so the new track just has to be fully functional by August.

You Know It Makes Sense – This week came reports that customers at a Sainsbury’s cafe were being stopped from having black pudding with their full English breakfasts – due to the religious beliefs of the chef … It seems that truth really is stranger than fiction. 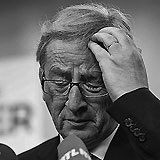 A Message From Europe – With Brussels being the latest city to suffer at the hands of suicidal religious fanatics the whole concept of a unified European state with free movement and common values is again called into question.

The differences between the many regional, ethnic and religious groups – even in western Europe – are deep seated and strongly held. But, even with these atrocities on their very doorstep, dedicated eurocrats have already been pushing for more money and more integration as solutions to the latest security breakdown.

Despite so many citizens wanting to stick to their traditions, religions and regional locations the message from the top remains – more power for us. And for you – Stop moaning. Keep paying. There is no way out.

The BBC have made millions out of Top Gear over the years – and are still making money from repeats all around the world. But the Jezzer, Captain Slow and Hamster show had been in gradual decline for years – with a best before date that has been slipping further into TV history.

As is so often the case the BBC were reluctant to stop such a popular show – probably because they had no replacement. So when a major revamp was a forced upon them their only plan was to repeat the format – but with a new cast and crew.

The actual outcome will not be seen until this reincarnation hits our screens later this year – possibly in May. But, even without the coordinated attacks from some sections of the UK press, the show’s chances of success are fading fast. Take the most recent leaks. The headlines were all about the disrespect shown by burning rubber near the national war memorials in central London.

But this was not the only black mark recorded against just this one segment. 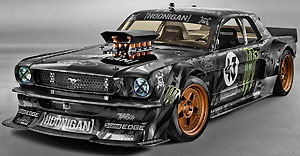 Why would any BBC show want to feature a one-off US publicity vehicle – complete with advertising – burning up public roads anywhere in the UK? How does this 845hp Hoonigan Mustang conversion – sponsored by Monster Energy – breaking so many traffic laws fit with our public service broadcaster’s declared objectives? And how does Chris Evans’ claim that he was not involved in the Cenotaph stunts fit with his supposed lead role in the show? Surely shipping a one-off car and support team from the States, closing roads and booking actors for a sham marriage at St Paul’s Cathedral in a segment estimated to cost £100,000 would have needed his personal approval? If not then who is taking the lead role? And why would Evans not know what was planned in some detail even if not in charge?

Now all of this publicity might just be a cunning plan to generate interest in a new show. But I doubt it. More likely it is another example of the BBC not knowing when to quit …

It was in September 2014 that Grandad warned of giving EU benefits, and ultimately membership, to Turkey as a step too far.

Yet politicians, in both Britain and the rest of Europe, have continued to make concessions and give support for exactly that – a potentially disastrous expansion into Asia. Failing to see – or simply choosing to ignore – what many ordinary citizens find blindingly obvious.

This latest round of concessions by EU leaders – lead by Frau Merkel – to Turkey seem to be a combination of naivety and desperation. Their controversial deal will see migrants arriving in Greece from tomorrow onwards being sent back. But the EU will then take in matching numbers of Syrian refugees directly from Turkey. In return for this help Turkey will get billions more in EU funds, visa free travel to Europe by June and shorter negotiations for EU membership. All this at a time when Turkey seems to be moving further away from western democratic standards – and is still occupying Cyprus. No wonder that the Turkish politicians are delighted. 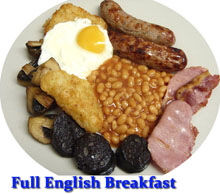 Pro-EU campaigners have avoided a potentially disastrous EU development as the NHS has now come out in support of the health benefits of the planned EU version of the English Breakfast.

It seemed that the new EU rules removing all pork products and salmonella-prone eggs from publicly funded menus and unlicensed premises would be a fatal blow in the upcoming UK referendum.

But key figures in the NHS stepped in to support the changes and claim that they would save many thousands of lives – while cutting millions off the UK’s escalating health care budget. This provided a measure of damage limitation for the Remain campaigners – and a promise of extra government funding for the NHS researchers.

So if these EU plans do go ahead then the Full English will only be available at those premises that are licenced to sell non-halal food products. However the high cost of a UK licence and the extra insurance premiums required for egg coverage could move the meal into the luxury food bracket. 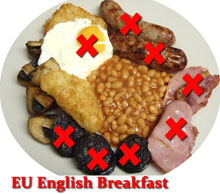 Overseas the governments of most other EU countries have warmly supported the new EU rules – with only Spain objecting since it would impact their tourist industry. However Spain and most other EU member states also have indicated that they will not be able to police the new rules without additional funding. Meanwhile in Germany a pork licence will be available to its citizens as a free download.

In London a Whitehall spokesman told reporters that UK citizens would be healthier and happier living under these beneficial EU rules .. and You Know It Makes Sense.

Note; some – or all – of this item is probably just baseless rumours. So no need to worry … yet. 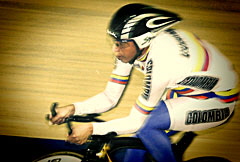 Today sees the start of the World Track Cycling Championships at the site of the 2012 Olympics in London. Many competitors there will be hoping to show selectors that they are on track for winning medals at the next Olympics in Rio. Certainly Team GB will have their best opportunity yet to shine in front of a home crowd before August comes around. Many other sports will have the same objectives in mind during the build up . And even the media will start to pick up its coverage of less popular sports as the Games draw nearer.

Historically Britain’s medal winning improvements in cycling have their roots in the move of sport’s administration and potential team members to new facilities in Manchester. However the results in Rio are unlikely to be so full of gold as they were up to 2012. Other countries have followed the British example, developed new sports science facilities and lifted their game to the same level – and beyond. Other sports are at different points in their cycle of relative performances. And this time swimming and athletics could be on the up but team sports could be down. The sheer scale of the global sports industry in 2016 means that vast sums can be made and spent winning the biggest prizes – with the Olympics being right there at the top.

Meanwhile on the ground in Rio the actual construction of the new Olympic velodrome is running late – to the extent that the test event planned for late March has now been moved out to 30 April. That will leave just three months before the Games opening – not much time to correct any snags or design faults. But even without any venue problems – and nasty mosquitoes – winning gold in Rio is going to be that bit harder than ever before …