The end of the year so time for a quick review of some earlier stories that kept on running ..

Blatter Splattered – Just days after our article FIFA announced an eight year ban for president Sepp Blatter and vice-president Michel Platini. Blatter claimed afterwards that he was still FIFA president until February 2016 but that must mean very little when he is banned from anything to do with football. And with so many suspect transfers of funds yet to be invested, some reaching back for decades, Mr Blatter may be best advised to head for somewhere safe and far, far away. 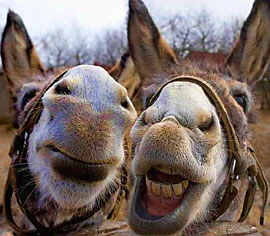 Look At Me – a robotic weather presenter, powered by Microsoft’s Xiaoice, is now appearing live on Dragon TV in China; a channel that is part of the Shanghai Media Group. For its part Microsoft have been quoted as saying – As Xiaoice is gradually penetrating into human life, engaging herself in more jobs and playing more social roles, Microsoft expects her to bring more bliss to human beings. But perhaps that quote sounds less sinister in the original Chinese?

Unarmed Invasion – Frau Merkel’s open door policy on migration has backfired so badly that even she has had to backtrack to a more realistic position. But not before she was awarded the accolade Person of the Year by Time magazine – the sort of ironic gesture normally reserved for the Nobel Peace Prize. At least her actions gave the migration issue a boost up the eurocrat’s agendas – and lead to some EU countries taking a clearer stand on the practicalities of moving millions into unsuitable locations.

According to Save The Children – 2.1 million Syrian children are now refugees with 7.5 million affected by the conflict. More than 10 million people have been forced from their homes and 13.5 million need humanitarian aid. So there is still a long way to go if Europe is going to feed, clothe, house, educate and employ a significant number of them. But it could be a social and economic disaster for many smaller countries even if migration was limited to just Syrians. But many more from Africa and the Middle East also want to migrate to western democracies so the one million reaching Germany this year are just a drop in a human ocean.

Powerless UK – someone has pointed out to the UK politicians that closing Eggborough Power Station and losing its 4% contribution to the UK’s electricity capacity could be a step too far. To save a little face Eggborough will now be kept on standby instead.

Missed Gear? – back in June Grandad suggested that the BBC would have been better served by selling the Top Gear franchise while it was still highly rated. Instead the Beeb opted to spend £3 million (more by now?) on a high-risk, new format show with Chris Evans as both its presenter and producer. There is still over four months until the first episode is due to air but already the press has plenty of bad news. The relaunch of ‘Top Gear’ is in disarray after the executive producer, personally brought in by Chris Evans, quits the BBC motoring show … Losing the knowledgeable production team behind the show has also caused teething troubles … They’ve brought in a production team that doesn’t know anything about cars. Writers from Top Gear magazine have had to be called on for .. ideas and advice. If the BBC was stock market listed then its shares would be falling rapidly.

History Repeats Itself – last Christmas Grandad moaned about the quality of the festive TV schedules. This year we could re-hash the same story as even Chas & Dave’s Christmas Special from 1982 is wheeled out again. But you know the story by now so no point in adding to the repeats count ourselves. No wonder sales of DVDs, Blu-rays and download subscriptions are so popular.

We can now announce the results of our inaugural Whitehall Farce Award for long-running bungling ineptitude within Whitehall and its offshoots. And in the end the runaway winner was that first nomination – the Proposed EU Referendum. So despite challenges from High Speed Rail 2, Runway 3 Heathrow, Northern Powerhouse and Nuclear Energy there was a clear-cut and undisputed winner. 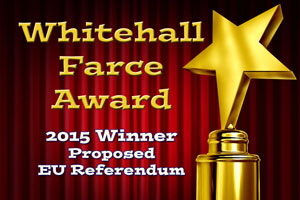 However our awards ceremony planned for tonight has had to be canceled after our organisers – the events arm of the Grandadz charity – mislaid its funding. There had been rumours circulating for several weeks that there were problems. But the charity’s boss, Carmen Bataneyelid, had reassured us that everything would be fine and all the key figures would be there for a glittering evening of fine dining and entertainment.

Certainly the promises of a five course organic, halal, kosher vegan banquet and a rare live performance by Coldfeet did sound very appealing. But alarm bells should have started to ring when the Royal Albert Hall called to chase a missing booking deposit. However Ms Bataneyelid reassured us and them that this was just a misunderstanding and that an envelope containing the cash would be delivered shortly by a old man in a grey shell suit. We were all very upset to find out later that the old man had been robbed when he stopped in Westminster for a fair trade macchiato. A matter that warm-hearted Ms Bataneyelid did not report to the police to avoid any further distress to the old man and any bad publicity for the charity.

The next day Ms Bataneyelid and three of her assistants had to fly to Zurich to discuss setting up a Swiss branch of Grandadz and to collect some donations from reception at the Hotel Baur au Lac. But it seems that they did not board their flight back to the UK. We have not been able to contact them since. With no venue confirmed and unpaid caterers we decided to cancel the 2015 award ceremony and send the award to the Referendum Office by second class post. Hopefully the 2016 award ceremony will turn out better … and that Ms Bataneyelid and staff are able to return safely very soon.

Back in May the FIFA media machine provided us with our Website of the Day – featuring Sepp Blatter enjoying his triumphal re-election. Just six months on and FIFA’s President Blatter is suspended from office and under investigation for criminal malpractice. A dubious privilege shared by a number of FIFA vice-presidents that may have been tempted by the many millions of Swiss Francs flooding through FIFA’s hands for decades. 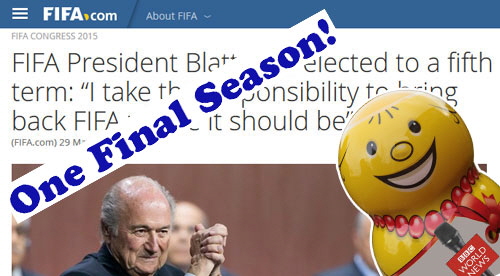 And in last night’s report on BBC TV retired journalist Andrew Jennings was given what may have been his final opportunity to spell out just how far the alleged bribery and corruption has spread. With thirty or more people linked to the top of FIFA already under investigation Jennings is not the only one with incriminating evidence. In fact the shocking stories reported by Jennings may turn out to be just a small fraction of the malpractice that actually occurred.

Last week this was issued by FIFA …The Executive Committee has today unanimously approved a set of proposals from the 2016 FIFA Reform Committee to pave the way for significant and much-needed changes to FIFA’s governance structure. The recommendations will be put before the Congress as proposed statutory changes for approval at its extraordinary session in Zurich on 26 February.

This meeting is where Blatter is supposed to hand over power to his successor. But knowing how long legal cases can last not much will have been resolved by February 2016 – and even more FIFA big cheeses may be unavailable by then. Meaning there may not be any eligible FIFA presidential candidates left to fill the Blatter vacancy. But with the 2018 and 2022 World Cup cash mountain already assigned it will be the build-up to 2026 before the next big football corruption opportunity comes along. So not a lot left to play for …