Replacement Windows – All of the Windows 8 devices at Grandad Towers have survived enough daily use under Windows 10 to start clearing out the backups of the old versions. Even the tiny Linx tablet came through OK despite a short stage in the upgrade process where the video was totally scrambled.

Greeks Without Gifts – The last of the Eurozone countries agreed to the latest Greek bailout loan late yesterday. So it looks like the 3,400 million of loan repayments that are due by Greece today can go ahead on time. But any scheme that involves borrowing more to pay back earlier loans is bound to fail unless there is either some right-off of the debts or a dramatic increase in government revenue.

DAB Radio Drags On and On – It is over two years since it became obvious that the push to switch to DAB radio would never reach its target market share in time and so trigger the switch-off of FM radio transmissions.

But the UK Government (where Ed Vaizey is still the Minister responsible) continues to be encouraged by the BBC / commercial operators to invest more on our obsolete DAB radio. A process that has been on going for five years or more in the form of the Digital Radio Action Plan. But more importantly was started with BBC trials in 1990 and launched publicly twenty years ago. Clearly technology has moved on – a lot – since then. Today the standard is DAB+ for radio transmissions with wi-fi / bluetooth / 4G being preferred for tablets and smartphones. 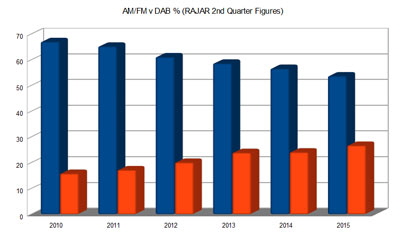 Despite these years of DAB radio promotion the latest survey from RAJAR shows that the slow decline in AM/FM listening mirrors a similarly slow growth in DAB listening. Current trends indicate that DAB will not reach the 50% of listening mark until 2026. And Ed Vaizey has even resorted to asking UK manufacturers to stop producing FM radios to try to force the issue. A strategy that fails to address the fact that Mark 1 DAB radio, as implemented in the UK, is so technically inferior to the alternatives. And each year that goes by makes the UK’s official position that much more untenable and out-dated. Despite this the second national DAB channel (the D2 multiplex / ensemble) licence was awarded in March with the objective of being on-air in 2016. 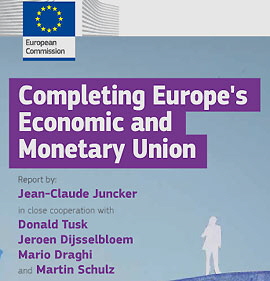 Finding out last year that the EU had three presidents rather than two came as a bit of a surprise. So discovering that this EU report – Completing Europe’s Economic and Monetary Union – was sub-titled the Five President’s Report almost made Grandad choke on his Werther’s Original.

But it’s true there are five EU big cheeses – and all united in the objective of making their jobs even more indispensable. With this in mind the report’s main aim is to push for complete EU financial union by 2025 at the latest. Union under their control of course. With the initial steps along this route already launched and a second round of steps expected to be agreed by July 2017 there is no turning back in the minds of the Five Presidents.

The report concludes with – Translating these proposals into action will require a shared sense of  purpose among all Member States and EU institutions. The European Council is invited to endorse these proposals at the earliest occasion.

So no dissent or withdrawal now. The mighty European Empire has launched their all-conquering machine – and there’s no stop button provided. Charlemagne would have been proud.