As any Grandads following the high speed railway project to run north from London (HS2) will have worked out the scheme has become an unstoppable political necessity. And despite the fact that no commercial backers are confident enough to put their own funds behind it, the project will roll on as long as the Exchequer keeps paying the bills; despite serious calls to take a different approach.

And the bills keep growing; some in rather unexpected areas. For example last week there was this glowing press release – HS2 Design Panel Chair, Sadie Morgan, has begun recruiting experts from many different design disciplines to the Panel that will oversee the design development of High Speed Two. To be a catalyst for growth across Britain and enhance the lives of future generations HS2 Ltd published its Design Vision in March 2015 to embed design excellence in all aspects of HS2. The Design Panel, led by Sadie Morgan will be a critical friend to HS2, ensuring that as it develops its designs it delivers on the HS2 Design Vision.

So this seems to say that the Exchequer will be funding a panel not to design anything but to check that someone else’s designs meet the Design Vision.

Back in March the government released the relevant Design Vision document – Developed with the input of leading UK designers, the HS2 Design Vision aims to ensure that all aspects of HS2 will add up to create one transformational experience and that design is used effectively to achieve the ambitious social, economic and environmental goals for the nation.

So the document developed with leading designers will be checked for compliance by leading designers – for a substantial fee no doubt. How different to the old fashioned way of doing it. Then the person hired to be the chief designer would be responsible and accountable themselves. But at least it is reassuring to know that experts selecting the right font and colour palette will convert this 20 year long, multi-billion pound gamble into a transformational experience. Be prepared to be transformed – hopefully in a good way!

p.s. Our Phrases for Future Eurocitizens slot has been terminated to comply with EU restrictions on sarcasm – and because we have all lost interest … 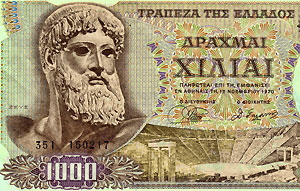 It is now eight weeks on from our first posting and still the Greek tragedy stumbles from deadline to deadline.

Last week the EU stumped up another 7,160 million euro as an emergency loan. And, as predicted, the UK was indeed hit with a large contribution (1,000 million euro) by our friends in Europe – despite not even being part of the eurozone. In return we have been given a ring-fenced promise that it will be repaid. But with the eurozone itself having eighteen countries (plus Greece) that could have paid a bit more it does feel like the UK is paying someone else’s bill.

So what did the Greek people get from this extra 700 euro per person of additional debt? Nothing. It was spent on the payments already due to the European Central Bank (ECB) and the International Monetary Fund (IMF). But there are more funds on the way .. probably.

First the ECB has shipped cash to Greek banks so that they can stay solvent. Next there are discussions aimed at agreeing a 86,000 million euro bailout. This third bailout loan is intended to re-capitalise Greek banks, pay interest on earlier loans and repay some previous debts [source BBC]. So again no direct benefit to the Greek people. It is simply a loan to help service earlier loans – which will next require a 3,400 million euro repayment by 20th August. But there are also proposals to sell off state assets. And if this goes to plan – and achieves their true value – the revenue produced should improve the situation – a little. However even after a fire sale of assets the total Greek debt will still increase; worsening the austerity situation in the country for years, possibly decades, to come. A situation that must be hard to swallow given the two recent democratic votes – first to elect anti-austerity politicians and then against any stricter EU constraints.

But at least the politicians at the top of the EU have a cause to celebrate. They have kept Greece within the euro block and maintained their onward march towards the goal of a mighty European Empire. One as great as that of Charlemagne …

We are persisting with these basic German phrases – as a service to those Grandads who stay in the UK after a Yes vote in the 2016/17 European Union Referendum and in response to this warning. Achtung! Anyone not reaching the required standard by the required date vill have their name reported to their local EU Commandant ..

Starting at the end of this month Microsoft will be rolling out the latest version of its Windows operating system. And every Grandad with a modern PC should already have had a notification to Get Windows 10.

It was only in October 2013 that many hours were spent downloading and installing Windows 8.1 on two PCs at Grandad HQ. Since then a new laptop and tablet have joined the network so that’s four major updates to work through. And with 5 million Insider users expecting to start updating on the 29th of July the world’s network traffic could see a substantial peak. It may be worth waiting a few days before making a start … Once on Windows 10 you will loose the option to defer or avoid OS updates – they will become automatic.

Anyone planning to upgrade should also be aware that Windows 10 is not just about adding new features. Some widely used options are going. The most obvious being the removal of the Media Centre functions and the need for separate playback software to watch DVDs or Blu-rays for all previous versions. Windows 7 users will loose their desktop gadgets and floppy disk users will need to install extra drivers separately.

But luckily there are no Windows phones to worry about at Grandad HQ – as Windows 10 Mobile has yet to prove stable enough to risk a general release. Considering that Microsoft has recently announced that over 6,000 jobs will go in its hardware division (i.e. Nokia) along with a write-off of over $7,500 million then the days may be numbered for Windows on mobile phones. Certainly with less than 3% market share it would be no surprise to see a switch to Android. A move that could increase sales and avoid the efforts that will be needed to get their Windows Mobile software up to Android’s level of acceptance amongst consumers and app developers.