Today marks the start of campaigning for the Scottish independence referendum in sixteen weeks time. And its timing illustrates just how big a gap exists between an official position and reality. Grandad has been covering the referendum debate since the first posting here in 2012 – yet it is only today that campaigning is supposed to start. And so far the whole issue has been clouded by contradictions and opposing claims.

claim to have figures proving the exact opposite. You would think that something as unambiguous as a national balance sheet would have some mutually agreed figures. But not so. In fact the £1,000+ worse off / better off argument is just the tip of the iceberg. And some of the political stances taken defy logic. In England – and much of Europe – excessive immigration is an issue. But the SNP have just announced a target of increasing net immigration by 10% in order to generate more taxes. However critics point out that with open borders any financial incentives to get people to move to Scotland would only last as long as the incentives were paid. Lump sums, reduced taxes or additional wages could easily be exploited if the new immigrants simple took the money and then emigrated to jobs in England.

Could the English also become Scottish immigrants to achieve the growth targets and earn a few incentives? Don’t bet on it!

However the most twisted logic seems to be the concept that being independent of Westminster is good but being independent of Brussels is bad. In a week when the anti-EU party, UKIP, made huge gains – including a seat in Scotland – having an independence plan that seeks closer political ties with Brussels simply confuses everyone. The pro-independence case would have been so much clearer – and stronger – if it had been based on independence from all external political control. But the prospects for such a late change are next to zero. And this confused argument may well undermine the Yes vote come September.

Despite a deep distrust for European politicians and a lack of interest amongst the British public Grandad.me.uk is dropping Imperial measurements. 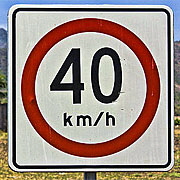 Few Grandads can remember the age of British Imperial power and no sane person would want to keep a system where even a simple nut & bolt had to be identified in sizes like 7/16ths with Whitworth threads or 15/32nds with BSF threads. The government were supposed to have switched everything over in the 1970s but never finished the project and lost interest. One story was that Mrs Thatcher decreed that changing the road signs would be too expensive. But how many millions have been spent on new road signs since then? And how many more signs will there be when they all, eventually, need to be replaced?

So our sat navs are being re-set as metric and we can pretend that the UK has at last joined the rest of Europe. Ireland finally switched to metric road signs in 2005 … but the UK still has no plans. None that is until the USA makes the decision for us.

In just ten days time we will all have our chance to vote for the candidates hoping to gain useful employment as MEPs – members of the European parliament. Not that we can actually assess any of these candidates personally – except in a few, exceptional circumstances. Normally we have to just vote for a political party and hope that they have nominated the best people that they have available.

Now looking at today’s YouGov poll results it seems that UKIP are going need the largest number of effective candidates for MEP posts – with the UKIP protest vote gaining 31% support against Labour’s 25%, the Conservative’s 23% and the struggling Lib-Dem’s 9%. As a result the politically-aligned media will be looking for damaging stories to try to dampen the growing dissent.

But this not just a UK issue as many other countries expect to see successes for what were minority or protest parties before. With around 70% of Germans saying that they do not trust politicians – almost as many as in Britain – the mainstream parties are likely to be punished. And if distrust is running at 70%+ here then just imagine how much it must be in countries like Greece. So a big vote against the powers that be is likely. But then with our Euro version of democracy few senior politicians will actually loose their well-paid EU roles. So they can keep smiling all the way to a golden retirement …