Despite this good advice from such diverse sources as aircraft engineers, software designers, Disney animators and even Leonardo da Vinci there is little evidence that our politicians and public servants are taking notice. 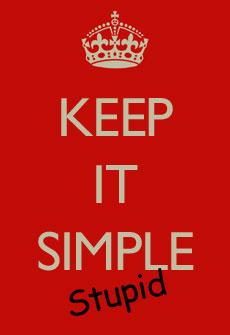 Today’s example was a government proposal to save money by changing some existing pensioner perks from being universal to being means-tested. The public servants – and think tanks – argue that it’s unfair to provide free bus travel to millionaire pensioners. So even though it would be hard to find a millionaire – of any age – travelling by bus they want to assess every applicant’s income to see if they qualify. This approach would mean that a relatively simple system based on age would have the added complexity, and operating overheads, of being linked to the taxation and benefits systems. A bus travel concession being available on a variable basis depending upon income. Any change in income would need a reassessment. One year you would qualify the next year you might not. Plus its operation would become subject to the whims of politicians who would feel to need to vary the income threshold and rules for eligibility. This would make for an ever-changing administrative problem that would need more and more manpower to keep going.

The KISS solution would be to say – if money needs to be saved on pensioners’ bus passes then just end the benefit completely. This would save the cost of the concession and the pass administration as well. The same approach could equally apply to the other pensioner perks currently under discussion in Whitehall – winter fuel payments and relief from TV tax for the over 75’s. A KISS approach would be – if there aren’t enough taxes coming in then scrap benefits one by one, in priority sequence, until the books are made to balance.

But there are a couple of problems here. First the politicians don’t like giving out bad news. They don’t want to scrap anything that would impact the majority of voters. Millionaires and city bankers are ideal targets since there are so few compared to the total population. Second the public servants are unlikely to have the broad range of experience required to draw up a priority sequence of benefit cuts. To be effective this needs to be based upon accurate and reliable cost-benefit analyses.

So instead there will be a fudge. One that does not look too bad to the average voter. But sadly this will not achieve the savings needed to improve the nation’s economic prospects. Debt will continue to increase. And there will come a point where no one will lend to us any more …

Councils are complaining about their street lighting electricity bills  – with one claiming an increase from around £1m in 2004/05 to an estimated £6m in 2015/16. Meantime the UK government has a mandatory “Carbon Reduction Commitment Energy Efficiency Scheme” [great title!] that forces large-scale energy users to purchase CO2 allowances [who said you can’t tax the air that we breathe?].

For councils this is, of course, a charge by one taxpayer-funded body on another taxpayer-funded body. In this example it means that the council expects to buy around £400,000 of allowances from the Treasury; probably the source of the council money originally. Perhaps politicians can now create an even more complicated scheme to rebate these charges for any needy councils? It all helps keep the paper pushers – and politicians – employed after all.

However some councils seem less concerned about doing anything practical. For example, turning off the daytime street lighting in Grandad’s local area.

Now it could be that the lights are expensive to re-programme – but if the council are happy to consume this electricity 24 hours per day then perhaps they should let our local electrician divert it into some senior’s homes instead.